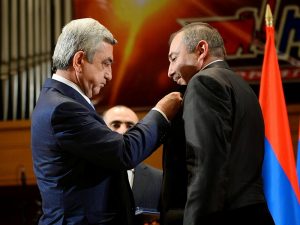 We, the representatives of civil society, consider discrimination and hate speech, continued physical and psychological persecution of people, as well as violations of the judicial system on these occasions in Armenia unacceptable.

In particular, we express our concerns regarding the verdict of the case 2042/02/14 made by the judge of the Kentron and Nork Marash General Jurisdiction Court Ruben Nersisyan, where the court has decided to reject the request of 16 citizens to make sanctions against the “Iravunk Media” LLC and the editor of “Iravunk” newspaper Hovhannes Galajyan for sullying the honor and dignity of the citizens.

The subject of the suit is described in the article titled “Those Serving the International Homosexual Lobby Interests: the Nation and State’s Enemy Blacklist”, which contains hate speech and discrimination and insults the honor and dignity of the citizens. It also contradicts the fundamental principles of the Constitution of Republic of Armenia the fundamental human rights and freedoms of the citizens, as well as the international obligations ratified by the state.

With this decision the court puts citizens’ safety, privacy and right to non-discrimination at risk, while it also suggests that more dangerous forms of discrimination can take place with little consequences.

We are convinced that such kind of attitude toward citizens, which is being supported at the state level creates an atmosphere of impunity and a platform for more severe forms of hate crimes. MP from the ruling Armenian Republican Fraction Hayk Boris Babukhanyan, who is also “Iravunk Media” LLC founding editor-in-main, seems to believe that the announcements in the newspaper, which clearly contain hate speech and discrimination, are legal. Moreover, awarding Hayk Babukhanyan with Medals of Honor at the highest state level sets a dangerous precedent for Armenia; it not only rewards but also encourages the spreading of hate and violence in society.

The ignorant attitude of the state toward hatred, prejudice and acts of discrimination threatens the public order and national security of the country as well as discredits the international image of Armenia. With the absence of an adequate legal system, the future of protecting human rights looks rather forbidding. Illegal actions will only reinforce the problem at hand and lead to more deeply rooted divisions in Armenian society.

We, the organizations listed below, demand the authorities of the Republic of Armenia to do the following:

The Constitutional order, promoting the development of multiculturalism, should be established in the Republic of Armenia, for it is the only guarantee of citizens’ freedom, justice, and dignity.

“Institute for Democracy and Human Rights”