International Day against Homophobia and Transphobia 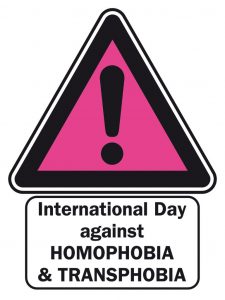 May 17 is the International Day against Homophobia and Transphobia. It is celebrated every year on May 17 in more than 100 countries in order to raise issues about violations of LGBT human rights. The day is symbolic because of the fact that on May 17, 1990 World Healthcare Organization removed homosexuality as a mental disorder.

“Public Information and Need of Knowledge” NGO expresses its concern regarding vivid expressions of homophobia towards LGBT (lesbian, gay, bisexual and transgender) people living in Armenia, which became basis of human rights violations of LGBT people, hate crimes and an atmosphere of impunity.

In Armenia, one can find human rights violations of LGBT people in every sphere of life – in the family, armed forces, law enforcement bodies, institutions of medical care and education, mass media, the workplace, public and social spaces, church etc. Almost every space within our public is a site of possible discrimination and abuse for LGBT people.

72.1% of the public has a negative attitude toward LGBT people in Armenia (survey). A big number of homophobia in the society, calls of state officials that spread hatred and intolerance and justification of crimes against LGBT people by them created a climate of impunity in the country, as well continuously contribute to the growth of crimes against LGBT people, which endanger the realization of democratic processes, violate human and civil rights and freedoms set in the RA Constitution.

The impunity, state sponsored intolerance and discrimination, extreme and denying illegal practices, in fact, disrupt the society, endanger the public order, national security, and discredit Armenia’s international reputation. According to RA Constitution, Article 3, the human being, his/her dignity and the fundamental human rights and freedoms are an ultimate value. The state shall ensure the protection of fundamental human and civil rights in conformity with the principles and norms of the international law. The state shall be limited by fundamental human and civil rights as a directly applicable right.

With this statement, once again, we want to express our strong concern and disappointment that fundamental rights and freedoms of LGBT people, a part of society, are not respected and ensured in the Republic of Armenia. Moreover, “favorable conditions” are created by the state level for violations of the rights of LGBT people, promotion of violence and committing offenses.
We ask and require from the authorities of RA to carry out their duties and obligations assumed by the RA Constitution and laws, as well as to undertake concrete actions to ensure the realization of rights and fundamental freedoms of LGBT people living in Armenia enshrined in the Constitution, to prevent any abuse towards LGBT persons, as well as the propaganda, call or encouragement of such abuses.

In the Republic of Armenia, as in a social and legal state, RA Constitutional Order must be approved for the sake of freedom of our society and nation, dignity and multicultural development[:]