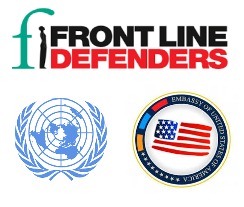 After the news was spread about that from October 17-18 was held first Armenian LGBTI forum, numerous threats have been made against LGBTI community member and their supporters both online space and personally.

On this occasion announcements were released by U.S. embassy in Armenia, UN office and Frontline Defenders human rights organisation.

For learning more information about the case on October 29 U.S. Ambassador to Armenia Richard Mills, Jr., visited the “Rainbow” forum organiser of the PINK Armenia NGO’s office, which was the organizer of the “Rainbow” forum. After the meeting embassy expressed concern with regard to the situation and “condemned in the strongest possible terms” such calls for violence, at the same time urged RA authorities to fully investigate these threats and protect the basic human rights of the group’s members and all LGBT residents and minority communities in Armenia.

“I have been in Armenia long enough, and spoken to enough Armenians throughout the country, to know that violence and hatred are not part of Armenian society and values. I urge Armenians to reject these calls to violence.  Those who would espouse such strong hatred of people simply for being different do not adhere to Armenian values as I have seen them,” Ambassador Mills said.

UN office in Armenia recalled, that Armenia has made commitments to non-discrimination and tolerance, including respect of human rights of sexual minorities.

UN also called Armenian authorities to not avoid the harassment against LGBTI community.

“We call upon the authorities to investigate and prosecute incidents of harassment and abuse against the LGBTI community, to discourage all hate speech, and to take measures to foster tolerance,” says the UN statement.

Expressing their concern over the harassment against members of PINK Armenia and other LGBTI forum participants, Frontline Defenders noted that these acts are an attempt to prevent LGBTI rights defenders from carrying out their peaceful and legitimate advocacy in defense of human rights.