After the screening of Listen to Me in Geneva. “The diaspora must participate in the struggle of LGBT people in Armenia”

“Listen To Me: Untold Stories Beyond Hatred,” PINK Armenia’s documentary film about the lives of 10 LGBT people in Armenia, was screened in Geneva, Switzerland by HyeStart and Dialogai.

Alexis Grigoryan of HyeStart spoke about the 2012 bombing of DIY, an LGBT-friendly pub in Yerevan, and presented Armenia’s history and overall issues before to the screening.

Following the screening, HyeStart president Alain Navassartian, speaking about the situation for LGBT people in Armenia, said it is necessary that the Diaspora becomes involved in the struggle for LGBT people’s human rights in the country.

Turkish sociologist and human rights activist Pınar Selek, who was invited to the event as a guest speaker, said that like Armenia, Turkey does not have legislation that protects LGBT people from discrimination. Selek spoke about uniting the struggle for human rights protection between the two neighboring countries.

About 50 people attended the film screening, including representatives from Amnesty International and the United Nations.

Following the screening, guests were treated to Armenian wine, which, according to Alexis Grigoryan, they enjoyed. 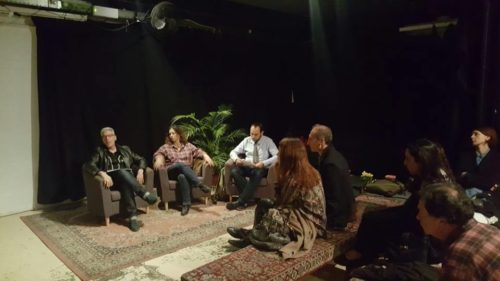 Tags: Listen to Me UN