Many lights for human rights 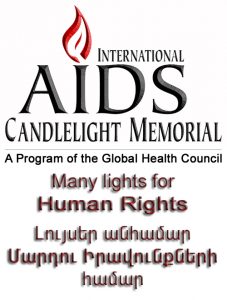 Old friends were again together to light their candles for those people who passed away from AIDS. This year AIDS Candlelight Memroial was celebrated on May 16. Positive People Armenian Network, Real World Real People with Public Information and Need of Knowledge NGO conducted the event “Many Lights for Human Rights”.

We started event at 6pm, when everybody gathered at Cascade. Participants took part in sewing the quilt which had 207 pieces, exactly the number of people who have died from AIDS in Armenia until now.

Later we all lighted the candles, and let the red and white balloons fly in the air. There were different messages on the balloons promoting tolerence toward people living with HIV.