March in Memory of Zaruhi Petrosyan 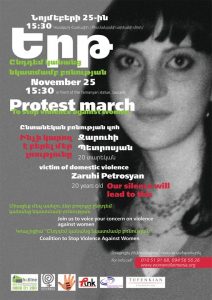 Following the tragic death of Zaruhi Petrosyan, October 1, 2010, numerous non-governmental organizations joined together forming the “Coalition to Stop Violence Against Women” to follow-up on the issue and raise awareness on violence against women in Armenia.

The Coalition invited the masses, the civil society and human rights activists to join the protest march on November 25 in memory of the victims of domestic violence and Zaruhi Petrosyan, also to engage in different events organized by the various NGOs during the 16 days of activism (November 25th – December 10th) to stop violence against women.

The protesters marched to hand in open letters to several relevant governmental bodies drawing attention to such cases and the issue of domestic violence against women in general. The population was encouraged to sign a petition to support the initiative and collect money to help the one and half year old daughter of the victim, now left orphaned.