IDAHO (International Day against Homophobia and Transphobia) is marked on May 17th. This day is celebrated in more than 70 countries and has become a very important date in the cycle of the annual events.

Nowadays, IDAHO is officially recognized by EU Parliament, Spain, Belgium, UK, Mexico, Costa Rica, Netherlands, France, Luxembourg and lately by Brazil, as well as by many personalities, organizations and institutions. In Argentina, Bolivia, Australia, Croatia and in other countries national civil society coalitions urged their officials to recognize that day officially.

Louis-Georges Tin, French university lecturer, campaigner for Black and LGBT Rights and chief editor of the «Dictionary of Homophobia», launched in August 2004 an initiative to create an International Day against Homophobia that is global in scope. He launched an appeal « For a universal recognition of the International Day against Homophobia » (IDAHO) and proposed that this day be fixed on May 17th, to commemorate the World Health Organization’s decision to remove homosexuality from the list of mental disorders.

Armenia is not behind the international scene either. It is through the efforts of Public Information and Need of Knowledge (PINK Armenia) NGO that Armenia has become the participant of IDAHO in 2010 and 2011. We are happy to mention that this important day in Armenia was commemorated not only in Yerevan but also in Vanadzor. 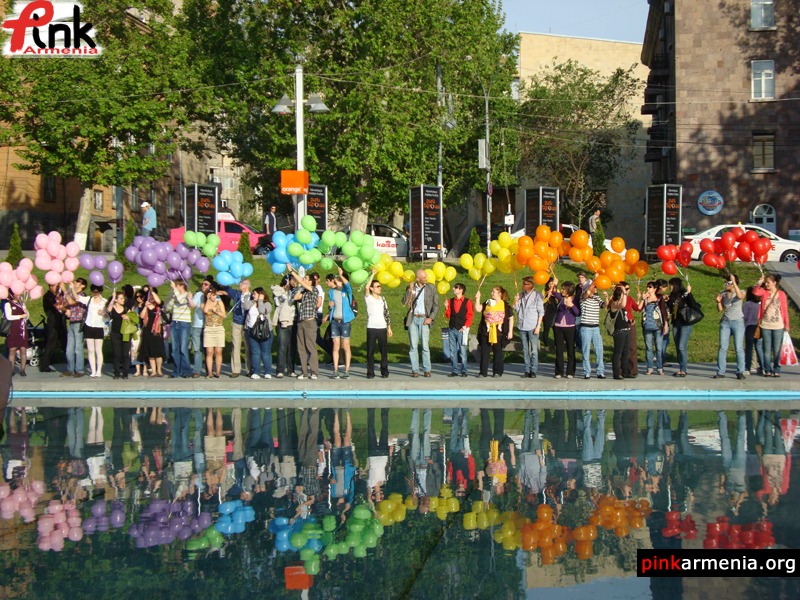 RainbowFlash events are organized every year. According to the data, 48 cities have participated in the event in 2010, including Yerevan, and in 2011 the number has reached till 50. Countries that participated include; Russia (23 cities in 2010), Germany (21 cities), Ukraine, Belarus, Kazakhstan, Israel, Czech Republic, Singapore and Armenia.

The idea of the event is to release balloons with the six colors of the rainbow by which confirming one’s eagerness to fight against homophobia and transphobia. Hans, the colors of balloons are defined for that day, we have added also pink as a color of our organization. Every willing person participates regardless their sexual orientation, gender identity and/or other characteristics.

The modern gay history of Armenia is quite “fresh” and “poor” in its “track”. The fact is homosexuality was decriminalized in 2003 only. A big legislative step for the image of the country. Naturally, it didn’t change people’s hearts and minds so far; despite the fact the veil of taboo is being ripped off of the topics regarding sexuality and especially homosexuality these days, LGBTs still are vulnerable, misunderstood, not enough visible so far. This is why, despite sometimes the hostile atmosphere of the country, some LGBT and civil society activists do their best in trying to change the situation. 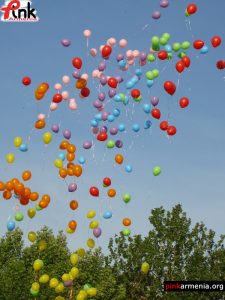 On May 17 at 7pm people gathered in Yerevan near the Swan Lake for participating in RainbowFlash 2011. The colorful part began when everybody received our pins with “As I am” message on it. Excited, with happy smiles and high mood, we were distributing between each other the balloons. Not only LGBT people but also some heterosexual men and women were involved.

Few seconds, and the pleasure began… lots of colorful balloons over our heads that have started their love-full and peaceful mission of floating in the sky. Pleasant experience, especially when it’s once in a year!

The mood was still high; girls and boys, and others, were chatting, making jokes; it was fun all around. So important to have this kind of small, but reinforcing and empowering events that inspire and revive hope. Hope and faith that it is possible to live in a country, where there are posters all around the city warning people to condemn homosexuality, because it makes the nation unclean… hope and faith that change is possible and we may create our own little Armenia; all-inclusive, non-discriminatory, friendly and cheerful regardless any characteristics…

Rays of love and positive energy were around us that day!