Silence is not a solution

World AIDS day – this is the day when the world wears red ribbon and takes actions to stop AIDS.

World AIDS Day in Armenia – this is the day when not all Armenians but at least several NGOs are raising the worldwide issue in the country. Since 2008 those NGOs work together, organize joint events and build stronger capacity for HIV awareness, prevention, treatment, care and human rights protection. Public Information and Need of Knowledge NGO (PINK Armenia) is one of them. 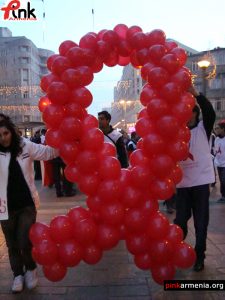 This year UNAIDS, UNDP and Mission East Armenian Branch supported local organizations to conduct joint event dedicated to the World AIDS Day. Event was prepared due to the World AIDS Campaign’s slogan “Universal Access and Human Rights”. PINK Armenia together with Real World Real People, Women Resource Center, Positive People Armenian Network, National Center for AIDS Prevention, Education in the Name of Health, Armenian Red Cross Society and Public Health Information Statistics created booklets with stories, telling the cases of human rights violations addressed to the people living with HIV, men having sex with men, sex workers, migrants, injecting drug users, women, the problems that they face in families, at workplace and in general in the society. The booklet was available during the UNAIDS press conference on December 1st for journalists, parliamentarians, civil society representatives and other guests.

That day, from early morning we gathered in front of the building housing many of the country’s Ministries, and set up special windows that carried the message “Open and see who can be affected by AIDS.” When people opened the window they saw themselves in the mirror, the meaning was that anybody can be infected with HIV. Usually people think that AIDS is not their problem, only drug users, “bad” women or gays can be affected by AIDS. We wanted to show that there are no risky people, but there is risky behavior that any of us can have. Mostly governmental employees didn’t pay attention, either they were late or they thought it was some action against them. 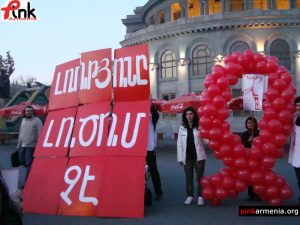 Later that day, we marched in the central streets of Yerevan, distributing info materials and spreading the message “Silence is not a solution”. During the march we had flashmobs with panels, when we put those panels together we had the slogan of the event and on the other side red ribbon. In front of the march participants were holding big red ribbon made of balloons. In the end of march, near the Opera House, we had the last flashmob there and blew up the balloons to break the silence.

To compare, if last year young people were passing by and asking: “Why are you having this event? We don’t have AIDS in Armenia,” this year people were more aware.

For HIV prevention there are 3 main steps: awareness, advocacy and behavior. Now we know about HIV, also awareness raising actions are widely spread in the country to inform about the ways of transmission and how to prevent it, but do we behave safer? That is the reason that we have a lot to do in order to prevent the practicing of risky behavior. And which is the most important – never keep silence, talk about it, ask if you don’t know and inform others when you are aware, protect your rights and help to advocate for others’ rights as well.