Between January and June of 2022, Pink’s lawyers and attorneys have provided 147 legal counseling and documented 22 human rights violations related to discrimination based on sexual orientation and gender identity.

Pink focuses on protecting the rights of every member of the LGBT community. To do so, the organization provides legal assistance: counseling on rights, drafting of various legal documents, representation at police, investigating authorities, and courts. 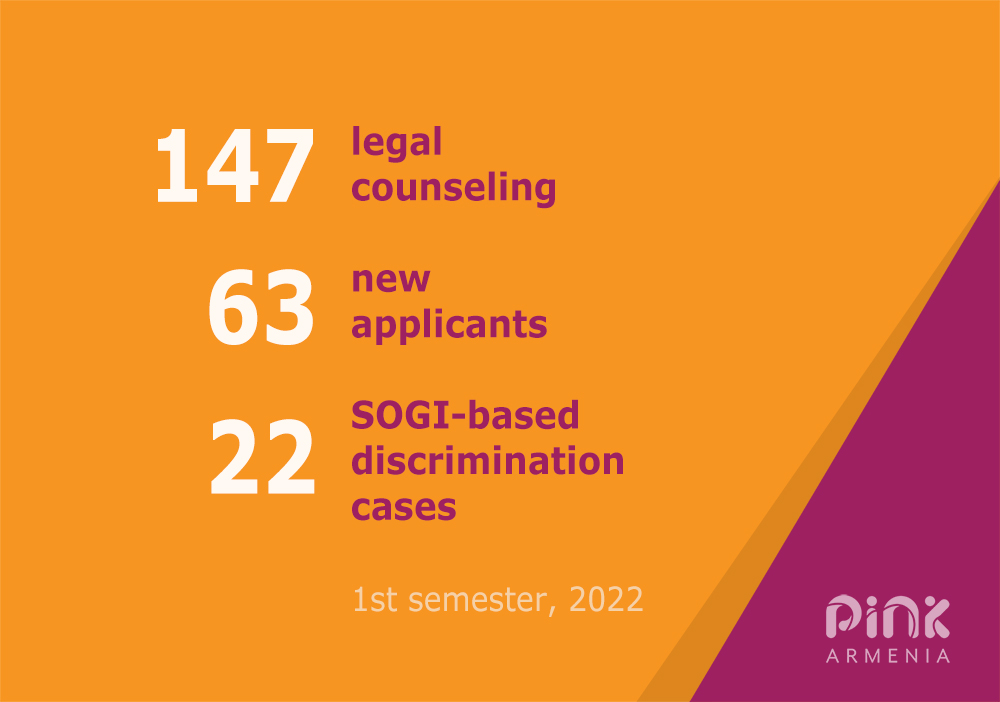 From January to June of 2022, lawyers and attorneys of the organization provided 147 legal counseling to 89 people. In addition, 63 of these individuals were first-time applicants for legal support, which means that today more LGBT people want to be aware of their rights. It should be noted that not only LGBT people living in Yerevan received legal advice but also representatives of the LGBT communities of Ararat, Lori, Kotayk, and Shirak. The organization was approached for legal advice by Armenians living in the Diaspora, as well as various foreign LGBT people – Russians, Iranians, and Ukrainians. Legal assistance was also provided to their parents, relatives, and friends.

The applicants called the hotline for legal counseling 42 times. However, most of the legal consultations were carried out through face-to-face meetings with clients, which allows creating an atmosphere of trust between the specialist and the beneficiary and organizing the work more efficiently.

After identifying cases of discrimination in relation to sexual orientation and gender expression during counseling, the organization provides free legal representation. Lawyers of the organization visit the police and investigating authorities and courts with victims of criminal offenses to protect their interests.

In 2022, the organization’s lawyers and advocates represented the clients’ interests 23 times. They visited law enforcement agencies with people who were discriminated against based on sexual orientation and gender identity and represented the interests of the victims, protecting their rights.

The organization has identified many cases of physical violence.

♦ On the night of June 18 to 19, 2022, around 2 a.m., two trans women were in an area considered a gathering place for trans women who provide sexual services. They were approached by three young men aged 23-28, one of whom was the applicants’ former partner, and the other two were strangers. According to one of the applicants, they were drunk. The men told trans women to “get out of here,” shouted insults related to their SOGI and their work and cursed them. The men began to pull women off their bodies and bags; one of them pulled out artificially extended hair and pulled on a finger, which got injured. The woman left her high heels and ran across the street. While running, one of the cars tried to knock her down, moving behind her. The men also hit the other trans woman who was wearing high heels and fell. Then they started kicking her, throwing cigarettes at her, and spitting at her. The applicants tried to stop a passing police car, which did not stop, after which the perpetrators said: “look, even the police do not help you.”

As a result of the violence, one of the women’s shoes was damaged, and her hair was torn out. The latter was forced to remove her hair, nails, and eyelashes for fear of being subjected to violence again. The other woman suffered multiple bodily injuries, her leg was scratched, and she later developed abdominal pain.

The women called the police. According to the complainant, the police arrived after 1 hour. The applicants and the perpetrators were taken to the police station. In the department, the perpetrators shouted sexual insults, saying: “we have to slaughter them, we have to eliminate them.” The police took no steps to prevent calls for violence; they only said, “come on, they’re rascals” referring to trans women.

In another case, a bisexual woman and her partner faced violence.

♦ In April 2022, the applicant, a bisexual woman, crossed the Cascade with her partner holding her hand. During the turn, an unknown guy, who must have been about 22 years old, accidentally appeared, dragged the applicant and her partner, and punched the applicant three times on the right side of the face, in the area of the eyes. The young man also hit the applicant on the head with a sack and shouted sexual insults. The man said: “I will not go into the army to serve so that people like you can safely walk around the country.” According to the applicant, the young man did not appear in the area by chance but hid and waited for them as he passed through the same area every morning. And the actions of the young man were related to the sexual orientation and expression of the applicant; in particular, the applicant often walked around this area, holding her partner’s hand, and also has a different appearance which is not typical for the Armenian community: she has tattoos on her arms and part of her hair is shaved off.

Although there were many passers-by in the area, they did not interfere at first. During the fight, some people intervened but blamed the applicant. The district security officers intervened some time after the violence and again accused the applicant of “misconduct.”

Cases of discrimination and illegal actions against LGBT people by government agencies, including law enforcement bodies have also been reported.

♦ To get a new passport, a trans woman had to apply to the regional military commissariat for a certificate of military service. In the military registration and enlistment office, a person was mocked and called “aper” (as they reffer to a man in slang). The officers refused to issue an official ID to the applicant because she looked like a woman, and they could not identify her, even though she had shown a photograph of her previous passport.

♦ In early February 2022, patrol officers violated the rights of a gay couple. The applicant and his partner were watching a film in the applicant’s car when two patrolmen approached them. The officers demanded to see the contents of the applicant’s bag and searched the car’s interior and other details without presenting any decision. The officers of the patrol service, realizing that the two were gay, began to rudely treat the applicant and his partner, saying: “Which of you is a girl?”, “Your girlfriend …” “Do you want to change your sex?”, “You are with girls? and boys? The patrol service officers noted that the applicants were committing an unlawful act: engaging in sexual relations in a public place, for which they should be fined. They also mentioned that the applicants should pay them because they had prevented the crime. 20,000 AMD was demanded from each of them. The applicant was able to convince the patrolmen that they had not committed illegal acts and had not paid the money requested by the patrolmen.

LGBT people are also discriminated against by various professionals when receiving services from them.

♦ The organization’s applicant is a trans woman who wants to undergo gender reassignment surgery. In March 2022, she contacted a plastic surgeon for a facelift. Together they discussed some issues; the surgeon wanted to see photographs of a person. The applicant sent her photographs and her page on the social network. After that, the applicant and the surgeon had a telephone conversation, during which the applicant stated that she was trans and wanted to change her gender. The doctor began to speak rudely to her and made discriminatory remarks. After the call, the applicant again tried to contact the doctor, but the latter did not return her calls or messages.

♦ Family members of the applicant, a homosexual woman, found out about her sexual orientation, so they tried to keep her indoors, restricting her freedom for a while, and also tried to deprive her of her means of communication. However, the latter ran away from home and went to the English Park with her friends. On June 9, 2022, the victim’s father went to the English Park, trying to take the girl home forcefully, but the latter resisted and did not want to go with her father. The father, using violence, hit her in the face, neck, and spine, dragged the latter into the car, and cursed at the friends of the victim, who were nearby at that moment. The applicant’s sister and aunt were also there, who helped the applicant’s father push his daughter into the car. The victim’s father also used violence against the victim’s friends who tried to help her. The father hit one of the friends, who bled from her mouth. After that, the victim managed to escape from the hands of her father, and one of her friends called the police. The applicant also submits that she was physically abused by her mother and father many times in her life; she had bodily injuries and also attended school in that condition.

Only 10 cases out of 22 were initiated in the first six months. Consideration of the submitted applications was always delayed, and the victims were not provided with the documents they deserved.

Summing up, it can be stated that cases of discrimination and violence based on sexual orientation and gender identity or expression in the Republic of Armenia continue, and even though the organization provides legal education to the society and represents the victims, systemic changes in the prevention of discrimination are possible only through effective steps taken by the state, such as the adoption of comprehensive legislation and its non-discriminatory application.

We remind you that you can get legal advice by visiting the organization or calling our legal hotline (099522533).