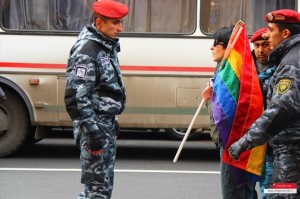 On December 2, several hundred demonstrators marched through the central streets of Yerevan to denounce the ruling regime, Putin’s visit to Armenia and President Serj Sargsyan’s decision to join to the Customs Union. Activists were holding posters stating “Putin, Go Home”, “Sovereign Armenia”, “To the barricades”, etc. Some clashes between protesters and riot police took place during the march. As a result, dozens of demonstrators were put to police vehicles and driven away to police stations. The police department stated that 110 citizens were detained on that day but activists claim up to 200 of them were taken to police stations.

The initiator of the march was Dignified Homeland bloc, uniting several political parties and NGOs. Protest participants were mostly young activists. They were holding national flags of Armenia and Ukraine, as a sign of solidarity with the Ukrainian citizens’ standoff against the authorities. The anarchism flag and a Rainbow flag were also waved during the protest. Rainbow flag was symbolizing LGBT rights movement and Putin’s anti-LGBT stance.

During the march activists Lala Aslikyan, Sevak Kirakosyan and their friends were attacked and harassed by several men. The witnesses informed that some of the violators were members of nationalistic Hayazn group (that recently transformed into a party). This was the same group that attacked the “Diversity March” last year, as well as the screening of gay-themed Parada film in Yerevan. After the march Lala Aslikyan and Sevak Kirakosyan were followed by police and detained along with other fellow activists however, without any indication that they were detained because of holding a Rainbow flag, but rather as part of a massive crackdown on all anti-regime, anti-Putin activists.

All the activists who were detained by police during the protest were later released.

photo by CivilNet.am
video by news.am