Has Armenchik joined the campaigning for LGBT human rights? 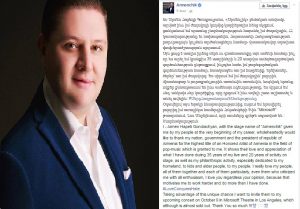 Armen Gondarchyan (Armenchik) used the hashtag of the LGBT (lesbian, gay, bisexual, and transgender) human rights’ online campaign while referring about him being granted the title of Armenia’s Honored Artist at his official Facebook page.

He thanked the president of Republic of Armenia, the government and his nation for the highest title of an Honored Artist of Armenia in the field of pop-music, mentioning that it is the reflection of his 35 years life and 20 years of professional career.

“I really love my people, all of them altogether and each of them separately, even those who criticize me with all enthusiasm; I love you regardless of your opinion, which motivates me to work harder and have more things done,” the singer wrote on his Facebook account and added the #LoveConquersHate hashtag which is used in the campaign for LGBT rights protection worldwide. It has been circulated by the organization Human Rights Campaign as an appeal to the anti-gay law adapted by Russia.