Homophobes can be jailed in Switzerland

Switzerland is changing its penal code meaning that people who are homophobic or transphobic toward someone else face the same punishment as if they were racist toward them, “Gay Times” reports.

Switzerland’s National Council voted in favor to update the penal code in September 25th, and people who break the law could face up to three years in jail. Still the change is not adopted, as it has to be discussed in National Council.

Mathias Reynard, who proposed the law celebrated its success. Posting on Twitter, he wrote: “Victory! By 118 against 60 and 5 abstentions, the National Council accepts my parliamentary initiative against homophobia and Transphobia!

“A great success for human rights! Final response in December to the Council of States.” 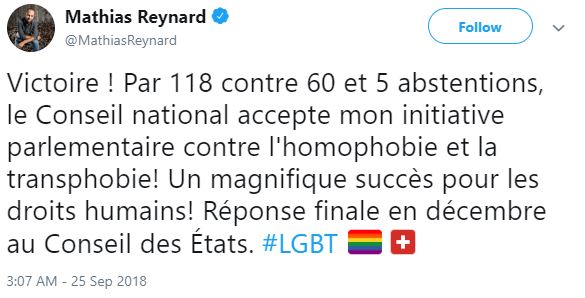 Following the vote, Reynard said: “Homophobia is not an opinion. It’s a crime. One in five homosexuals attempted suicide, half before the age of 20. This victory sends a strong signal. I have already received hundreds of reactions.”

Following Reynard’s victory he confirmed that he plans on introducing marriage equality to Switzerland. Since 2007, the country has offered civil partnerships, but same-sex couples don’t have the same rights when it comes to tax, fertility, welfare or adoption.