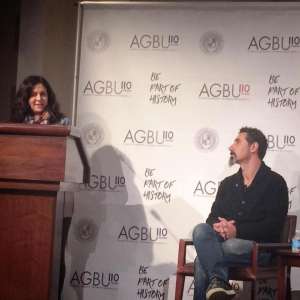 The Armenian General Benevolent Union’s (AGBU) 89th General Assembly took place on October 28, 2016, in New York, during which human rights issues in Armenia were discussed—what’s happening and how the Diaspora can play a constructive role in it. Rachel Denber and Giorgi Gogia from Human Rights Watch’s Division for Europe and Central Asia presented the current issues of palliative care and domestic violence in Armenia. They emphasized the importance of the adoption of a domestic violence law. Lawyer Sheila Paylan presented her interest and current work on war crimes. Renowned musician Serj Tankian presented a new initiative, “Justice Within Armenia,” which encourages Armenians from the global Diaspora to get involved in local issues, specifically to participate in monitoring and observation efforts of the upcoming parliamentary elections in Armenia in 2017.

During the commentary portion of the conference, Nvard Margaryan, Chairperson of PINK Armenia, presented the human rights situation and current issues of LGBT people in Armenia, beginning from the homophobic narratives and stereotypes that are widespread in general society to institutional homophobia and the polarization of LGBT issues. In the end of her speech, she highlighted the importance of the full protection of the rights of LGBT people as a prerequisite for democratic values and principles.

All panelists were hopeful that human rights would be addressed in a constructive and specific manner in Armenia, which they linked with youth and the current work of civil society organizations, initiatives and human rights groups.