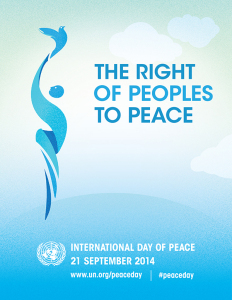 It has been already 30 years past since was adopted the Declaration on the Right of Peoples to Peace. On 30 November of 1981 UN General Assembly’s Resolution 36/67 established Peace Day to be held annually as a day of non-violence and cease-fire. The day is devoted to strengthen the idea of peace within and among all nations and peoples. Later on 6 October of 1999 Declaration and Programme of Action on a Culture of Peace was signed.

The main statements in all these declarations are claiming that the life without war serves as the primary international prerequisite for the material well being, development and progress of countries and for the full implementation of the fundamental human rights and freedoms proclaimed by Universal Declaration of Human Rights. Peace is not only the absence of conflict, but also requires a positive, dynamic participatory process where dialogue is encouraged and conflicts are solved in a spirit of mutual understanding and cooperation.

Humanity needs to eliminate all forms of discrimination and intolerance, including those based on race, colour, sex, language, religion, political or other opinion, national, ethnic or social origin, property, disability, birth or other status to decrease the persistence and proliferation of violence and conflict in various parts of the world.

Governments, international organizations and civil society should be guided in their activity by provisions to promote and strengthen a culture of peace. A culture of peace is a set of values, attitudes, traditions and modes of behavior and ways of life based on respect for life, ending of violence and promotion and practice of non-violence through education, dialogue and cooperation; full respect for the principles of sovereignty, territorial integrity and political independence of States and non-intervention in matters which are essentially within the domestic jurisdiction of any State.

A culture of peace also claims:

Nowadays conflicts are causing many violent deaths per year. Therefore promotion and strengthen of peace culture is vital for the nations living in our region.