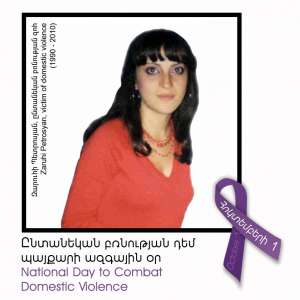 The tragic death of a 20-year-old woman on October 1, 2010, caused by her husband’s brutal beating, united seven non-governmental organizations concerned with the issue of domestic violence to form what we call the “Coalition to Stop Violence against Women.’’ PINK Armenia, as a founding member of the group, seeks to protect women’s rights and end domestic violence in Armenia.

Gender-based hate crimes are regulated by the criminal code, which is not sufficient for the liability and prevention of such crimes.

Domestic violence is not only a women’s issue: it is national issue. It is a human rights issue, a public health issue and it is a serious economic issue. The existing gender stereotypes in our society lead to domestic violence. The idea that man has the right to do as he wills with his wife is widely accepted in Armenian society. As a result, women are intimidated and do not speak about domestic violence, as it is considered shameful and could expose them to further abuse. The Armenian government has signed a number of international conventions on protecting women’s rights, but has not yet adopted the Law on the Prevention of Domestic Violence. Not signing the bill exposes the government’s attitude towards domestic violence, and shows that it does not give importance to its prevention.

Since October 1st, 2011 protests and candlelight vigils have occurred every year and the Coalition to Stop Violence against Women has handed a letter to the government demanding it to adopt the Law on the Prevention of Domestic Violence. The adoption of the law can promote the formation of a violence-condemning culture in society, eliminate perpetrators’ collective belief that they can stay unpunished, and strengthen a sense of protection for those suffering from abuse.

Furthermore, in the absence of legislation preventing domestic violence, the police instead often give morality lessons to victims, rather than to the perpetrators.

In Armenia, the bill has been suspended by the Ministry of Justice on the grounds that it was considered contrary to the right of property in Armenia. The Ministry of Justice claims that the perpetrator cannot be deprived from property by taking him out from the house, a punishment suggested by the Law on the Prevention of Domestic Violence. Our response is rather than the perpetrator being deprived of his home, he is removed for a certain period of time as punishment. If this law goes through, woman will subsequently need not leave their home with their children and seek shelter. Therefore, the continuation of violence will be prevented and the problem of shelters will be solved.

On October 1st, the members, supporters and volunteers of the coalition during will walk around all day around various neighborhoods in Yerevan to raise awareness as to where battered women can find help in cases of domestic violence anddemand that the government adopt the Law on the Prevention of Domestic Violence. Additionally, on October 1st at 6:00 pm, there will be a candlelight vigil near Swan Lake.

The ultimate goal of these two days is that the Armenian government will designate October 1st as the National Day to Combat Domestic Violence. On the following day, October 2nd, the letter will be handed to the executive authorities urging them to present the Law on the Prevention of Domestic Violenceto the National Assembly.