On May 17th, 2021, ILGA-Europe published the annual “Rainbow Europe Map and Index”, benchmarking 49 European countries on their legal and policy situation for LGBT+ people. Rainbow Europe ranks all 49 European countries on a scale between 0% (gross violations of human rights, discrimination) and 100% (respect of human rights, full equality). This year, Armenia ranked in 47th place once again, with an overall score of 8%, which is the same as last year.

It is worth mentioning that in 2020, Pink documented 41 cases of discrimination based on sexual orientation, gender identity, gender expression, sex characteristics, hereafter referred to as SOGIESC, where 21 victims reported their cases to the police. Some of these were rejected, and others have not been processed in a meaningful way. Also, Armenia’s third Universal Periodic Review (UPR) took place in January 2020. The civil society highlighted that Armenia had failed to implement its earlier UPR recommendations on adopting comprehensive anti-discrimination and hate crime legislation. 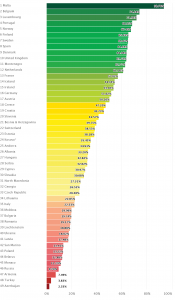 ILGA-Europe ranks the countries by examining the laws and policies that have a direct impact on LGBT+ people’s human rights in six categories: equality and non-discrimination; family; hate crime and hate speech; legal gender recognition and bodily integrity; civil society space; and asylum.

The only two countries that ranked lower than Armenia are Azerbaijan (2%) and Turkey (4%). Russia scored higher with 10% and Georgia scored 27%. Georgia’s score has been decreasing due to restrictions on freedom of assembly and association. Malta has been ranked in the first place once again with an overall score of 94%, followed by Belgium (74%), Luxembourg (72%) and Portugal (68%).

In order to improve the situation of LGBTI people in Armenia, ILGA-Europe recommends the following: