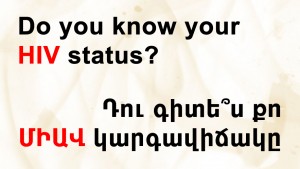 Annually June 27 is celebrated as International HIV Testing Day. This day aims to once again remind the importance of HIV testing. The theme for the day is “Take the Test. Take Control.”

Why HIV testing is important? Testing gives information about existence of HIV in organism which is detected through laboratory expertise. HIV-positive person may be unaware of their status for a long time, if he doesn’t have health problems (this period may last an average of 8-10 years).

HIV testing gives possibility to diagnose the infection on early stages. And timely started treatment can maintain the health and good physical condition for a long time. Being informed about HIV status is important also for the aspects of infection prevention.

Based on 2012 statistics, 35.3 million people are living with HIV, also about 1.6 million AIDS-related deaths were registered, 91 thousand of them in our region (Eastern Europe and Central Asia).

From 1988 to 31 May 2014 1761 HIV cases had been registered in the country among the citizens of the Republic of Armenia with 238 new cases of HIV infection registered during 2013, which exceeds the number of HIV cases registered annually in the previous years. The HIV/AIDS situation assessment shows that the estimated number of people living with HIV in the country is about 3700 (www.armaids.am).

HIV testing and treatment are still free of charge in Armenia. It is administered by the National Center for AIDS Prevention. To receive more information or preventive material you can contact PINK Armenia or National Center for AIDS Prevention any working day. There are also several other organizations working with most-at-risk population, as well as two well-known organization such as Real World, Real People and Positive People Armenian Network NGOs provide formidable support and care to people living with HIV.[:]