On March 1, 2022, the Administrative Court of the Republic of Armenia published a judgment rejecting the recognition of three advertisements that promoted tolerance towards LGBT people presented by “Pink” human rights defender NGO as social advertisements. The court once again contributed to the spread of discrimination and inequality in Armenia. The failure of the Ministry of Culture to address the issue of tolerance of LGBT people has, in fact, been justified by the court with this verdict, which paves the way for new discriminatory decisions and irresponsibility. 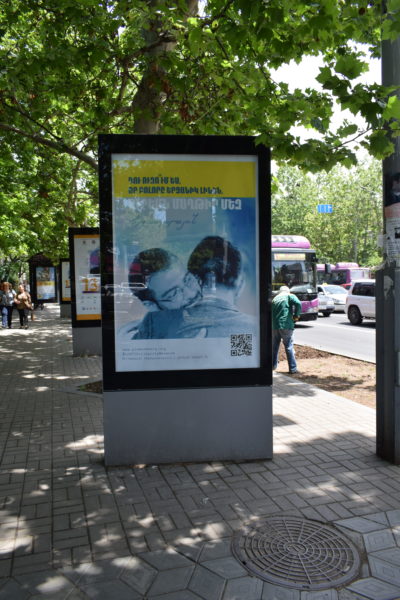 The State, in fact, on the one hand, on behalf of the Ministry of Culture refuses to give importance to the measures directed to increase tolerance towards LGBT people, and on the other hand, it refuses to conduct a fair trial through the judiciary and provide accessible legal remedies to LGBT people.

At the same time, the number of crimes against LGBT people is increasing annually paired with ineffective investigations, which makes this group more insecure and vulnerable in society.

After the court published the judgment, several staff members of “Pink” human rights defender NGO in the courtroom turned their backs on the court to express their protest, showing their T-shirts with the following words “Your biased decision is killing me.”

“Pink” human rights defender NGO is going to appeal the court decision, and even escalate it to the international human rights protection mechanisms. Similar applications are already pending before the European Court of Human Rights (ECHR). The ECHR will soon provide an assessment to the State regarding this irresponsible attitude, which encourages intolerance and leads to crimes based on the isolation and hatred of a specific group.

It is important to remind that in 2017, “Pink” human rights defender NGO applied to the Ministry of Culture to recognize three advertisements that promoted tolerance towards LGBT people as social advertisements. The Ministry of Culture did not recognize the “Do you want everyone to be happy? Then wish us happiness”, “LGBT people are not invisible. You meet them every day”, and “Trans people are part of our society” videos and posters as social ads.